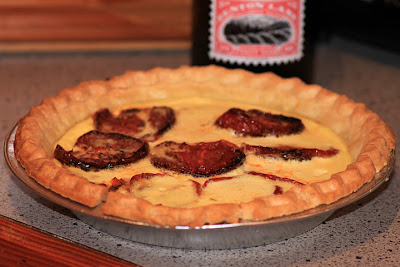 For Thanksgiving, Kirsten not only made a fig thyme cocktail and zucchini gratin, she also contributed this slow roasted tomato tart and apple crisp for dessert. See why we keep her around?

For the tomato tart, I admit I took a major shortcut. I planned to make the dough from scratch, but then it seemed too overwhelming and time intensive so I bought a frozen pie crust from QFC as a substitute. I still thought it tasted ok, but if you have the time and energy definitely go for the homemade crust. However, it isn’t worth cheating on the slow roasted tomatoes. Slow roasting is easy and gives the tomatoes a caramelized and rich flavor, not to mention it makes your kitchen smell so good! Since this takes a few hours, I roasted them a few days ahead of time and stored them in a Tupperware in the fridge. Once you have the tomatoes and crust complete, the rest is easy and just involves mixing together a custard as a base for the tomatoes. The major mistake I made is taking out the tart too soon from the oven—I’m sure cooking time varies based on your oven, but in this case it took more time than the recipe states in order for the custard to set. 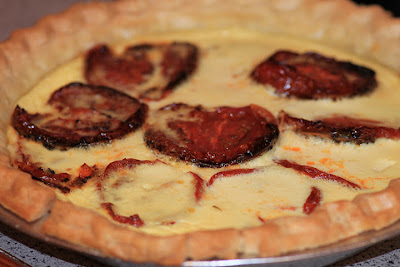 Tart dough
1. Blend the flour, sugar and salt in food processor to combine.

4. Turn out onto work surface and gather dough together into a ball. Flatten into a disk and wrap in plastic wrap. Refrigerate for 1 hour. Dough can be refrigerated for up to two days or enclose in a resealable plastic bag and freeze up to 1 month. Soften slightly at room temperature before rolling out.

2. Arrange the tomatoes, cut side up, on a parchment-lined sheet pan. Sprinkle generously with sugar, salt and pepper. Drizzle with olive oil and nestle the herbs between the tomatoes.

3. Place the tomatoes in the oven and roast until golden brown in spots and reduced in size by about half, approximately 2-3 hours.

4. While the tomatoes cook, roll out the tart dough on a lightly floured surface. Press it gently into a 9 or 10 inch tart pan with a removable bottom and fold in the overhang to reinforce the sides. Trim excess dough. Place the tart shell in the freezer until the tomatoes are done roasting.

5. When the tomatoes are done, increase the oven temperature to 400 degrees. When the oven is pre-heated remove the dough from the freezer, line with parchment or foil and fill with pie weights (dried beans or rice also work well). Bake, leaving weights in place until the dough dries out and just starts to turn golden, about 15-20 minutes. Carefully remove parchment or foil and weights. Return tart shell to oven and continue baking until lightly golden brown, about 10-15 more minutes.

6. Whisk one egg with 1 tbsp water in a small bowl. Remove crust from oven and brush a thin coating of egg wash over the inside and top of the crust. Return to oven and bake about two minutes more. Reduce oven temperature to 375 degrees.

7. While crust is baking, whisk together remaining egg, egg yolk, crème fraiche, milk, Dijon and a pinch of salt. As soon as pie shell comes out of the over, pour egg mixture into the shell. Arrange roasted tomatoes over the egg mixture.

8. Bake until custard is set and light golden brown in spots, about 15-20 minutes. Transfer tart to a rack to cool and serve warm or at room temperature.
Posted by Emily Adamson at 9:16 AM