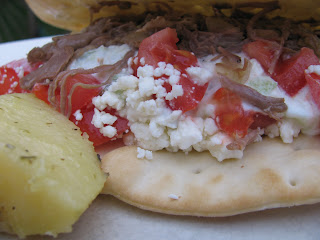 I was totally freaked out when Megan chose Lamb as March’s Ingredient of the Month.  I was raised in a mostly vegetarian family and although I am not currently a vegetarian I have absolutely no knowledge when it comes to cooking anything other than fish or chicken.  As soon as I read “Lamb” I was transported back in time to a BBQ we had in which we had invited my friend Heather over for dinner and she had kindly contributed the steaks.  I over-cooked them.  I am still embarrassed.
That’s my fear, really: that I will have a beautiful piece of meat in which a creature’s life has been sacrificed and I will not do it justice.  And I couldn’t bring myself to mess up a piece of Lamb because there was even more on the line this time; I mean, let’s face it: Lambs are way cuter than cows.  And for some reason that means something to me.
While researching Lamb recipes I came across a recipe for “Pulled Lamb” made in a Crock pot and I thought, “Eureka!”  If there’s one thing I DO know how to do, its Crock pot.  And pulled chicken in a Crock pot is like, the best thing ever for burritos and tacos and… “Eureka again!”  I’ll make a pulled Lamb Gyro.  Thank you to Closet Cooking, I didn’t have to go far to find the recipe.  Add in a side of Greek style potatoes, and Voilá! Dinner!
Pulled Lamb Gyros
Pulled Lamb (see below)
Tzatziki (see below)
Diced Tomatoes
Diced Red Onion
Crumbled Feta Cheese
Pita Bread
Directions: Set all ingredients up taco-bar style and let your family or guests pick and choose their toppings.  Pair with a yummy Greek salad or Greek style potatoes (recipe below). 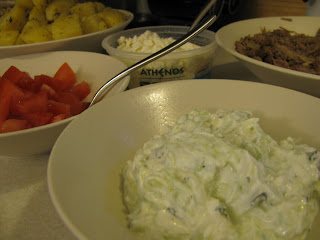 Pulled Lamb
2-3 pounds lamb shoulder or leg (boneless if possible)
3 cloves garlic (chopped)
1 lemon (juice and zest)
1/4 cup olive oil
1 tablespoon oregano
salt and pepper to taste
1 large onion (sliced)
2 cups water (Closet Cooking didn't add any water but I figured I should after watching it cook for a while and feeling like it was going to get dry.  Better to have too much juice than not enough.)
Directions: Combine all ingredients except onion and water and marinate Lamb overnight.  In the morning, put lamb and marinade in Crock pot and add water and sliced onion.  Cook at least 8 hours.  The meat will literally fall apart.  So yummy!  Make sure to remove all pieces of bone.  I took all the meat out with a slotted spoon and shredded it with two forks, then left it in a bowl and covered the bowl with tinfoil to keep the heat in.  (The preparation process the night before was incredibly easy and was done by the time my boys had watched their night-night show.) 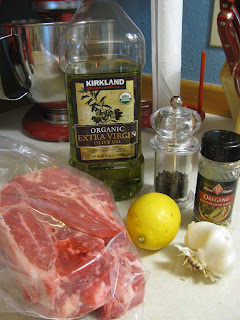 Tzatziki Sauce
1 cup Greek Yogurt
1 ½ large cucumbers peeled, quartered, seeded and shredded
2-4 garlic cloves, minced (depends on how garlicky you want it)
Teaspoon diced fresh mint
½ lemon, squeezed
Salt and Pepper to taste
Directions: Peel cucumbers, cut them into quarters, seed them, and shred them.  To get the juices out, I wrapped the shredded cucumber in a paper towel and squeezed, squeezed, squeezed.  I repeated that with about two more paper towels.  Combine all ingredients in a bowl and mix.  I made this the night before too, so that all the flavors would meld.  If you prefer your tzatziki to be smoother, you can also put the cucumbers in the food processor.  I like having the texture, so grated was good enough for me. 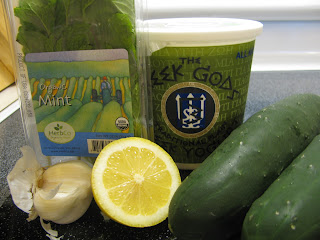 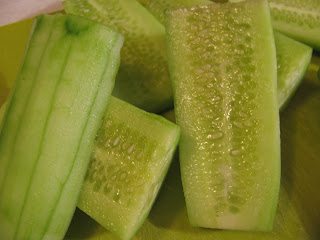 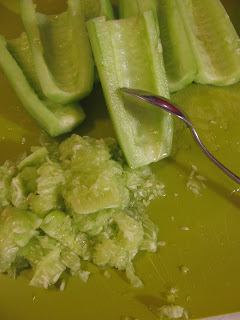 The hardest part was preparing the cucumber but after making my very own tzatziki I felt incredibly accomplished!

Greek-Style Potatoes
These were whipped up at 3:30 in the afternoon after the lamb had been cooking all day and my husband said, “What are we having with our gyros?”  Uh.  Quick google. “Oh, great!  I found a recipe that calls for ingredients we already have!”  After 10 minutes the potatoes were in the oven and I was back in my comfy spot on the couch watching How to Train a Dragon with Ansen.  I am super-mom.
4-6 large potatoes, peeled and quartered (or eigthed, as I chose to do.)  No, that’s not a word.
2 cloves garlic, minced
¼ cup olive oil (do less of this though, my potatoes were a little too oily)
1 ½ cups water
1 tsp dried thyme
1 tsp dried rosemary
1 tsp dried oregano
½ lemon, squeezed
2 chicken bouillon cubes
Directions: Combine all ingredients in an oven safe baking dish and bake at 350 degrees for 1 ½ to 2 hours, stirring occasionally.  That’s it.
I said I was super-mom before but that pissed you off, didn’t it?  That’s why I included the picture below so as to hopefully restore some of my street-cred.
Pin It