Like Emily's panini, the artichoke in this stuffed eggplant dish did not shine, however, the overall dish was really good! I think the superstar ingredients in this one were the ricotta and honey. And it was easy to make, in fact all it took was an episode of Dora the Explorer to distract the toddler long enough to prep this one. 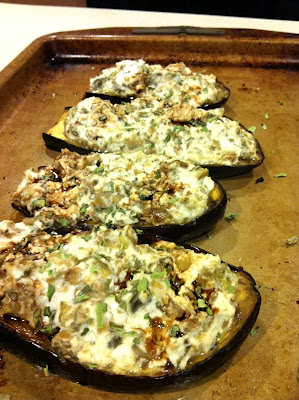 I adapted the recipe from a post I found while searching "eggplant artichoke recipes" because I had sweet little baby eggplants from Costco I wanted to use up. The original recipe made them into bite sized pieces and I think they would taste even better like that. Since I didn't have a crowd to feed, I made them into personal sides for me and Kelly instead. (No, the kiddo did not partake nor was he amused when I handed him a bite.) 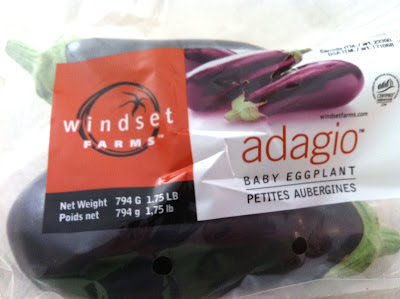 As for the artichoke, I bought the Costco 4-pack and reserved the hearts of two for this dish (which took some willpower not to dip in mayo and annihilate). I also threw in some of the baby leaves.

Again, loved this dish! But I think I might have to try again with artichokes and see if I can give them some more credit next time. Or perhaps chokes, if not eaten alone, are meant to be the lowly sidekick, the wind beneath the wings of some other awesome ingredient. The less attractive wing man at the bar who serves a purpose but will never take the spotlight away from the hot stud he showed up with. I dunno...hoping the rest of the Beauties can help me figure this one out...

In the meantime, try this:

Preheat oven to 350 degrees. Scoop out meat from center of eggplants making a little boat and set meat aside. Salt and oil eggplant boats and place in oven for 25 minutes or until soft like "buttah".

While baking eggplants, chop up artichokes and eggplant meat, combine. Heat skillet over medium heat and add in a drizzle of oil, artichokes, eggplant and onion mix. Pinch of salt and saute until softened, about 10 minutes.

Remove from skillet and add to ricotta and honey in a bowl. Pinch of salt and pepper to taste.

Remove eggplants from oven and fill with ricotta mixture. Place back in oven just long enough for ricotta mix to start melting some. Remove from oven, add basil and balsamic dressing as desired.

Email ThisBlogThis!Share to TwitterShare to FacebookShare to Pinterest
Labels: May featured ingredient, Missy