What's that green thing in my breakfast?

My husband is known for his "Kelly Mash" breakfast that he invented in college with a buddy. It's basically cheesy scrambled eggs mixed with potatoes (frozen or fresh, depending on how lazy he is) and sausage or bacon or both. I'm definitely a fan, probably because I'm a big mixer of my foods.

Like at Thanksgiving, I need to put a cut of turkey smothered in gravy, potatoes, stuffing and cranberry sauce on my fork for the perfect bite to happen. So naturally I loved the idea of this shepherd's pie because I like the idea of one-pot, all-in-one bite dishes.

My pie turned out great and I'm wondering if you can even go wrong with this recipe. Much like Kelly's Mash, can it ever be bad when you put a bunch of good things together?

Well, I was feeling frisky and made a few changes to the recipe. The first, I used a croissant crust based on the recommendation of a co-worker. It worked. It worked well! 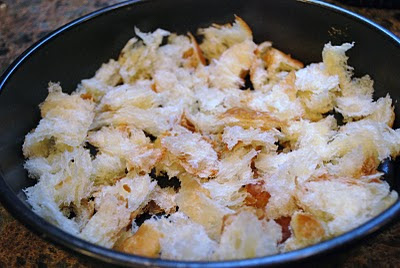 Second, I used spicy chicken breakfast sausage (because it was on sale; only reason), bacon I already had, onion I already had and I picked up asparagus to mix it up. Good, good, good and good, all of it. Although I got the devastated "Aww, you put asparagus in there?" question from Kelly. I partially cooked it with the onion and potato ahead of time for about 10 minutes before putting it in the pie, and the asparagus was perfect. It almost melted in my mouth with every bite; I loved it. Kelly, however, picked out just about every piece (which I then ate off his plate). To each his own. 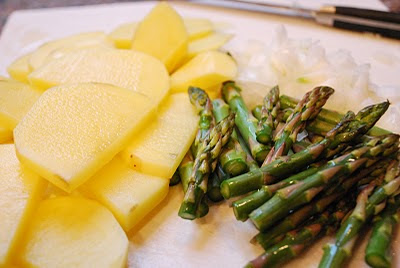 Lastly, I didn't use shredded potatoes. I topped the pie with yukon gold potato slices instead. And I added more cheese over the top because...well why wouldn't ya? Oh, probably important: I did halve the original recipe and we ate it two days in a row. It was plenty for two! I did use the full amount of cheese, however, and 5 eggs for the one pie instead of 4. I think that's it. I'm probably forgetting something... 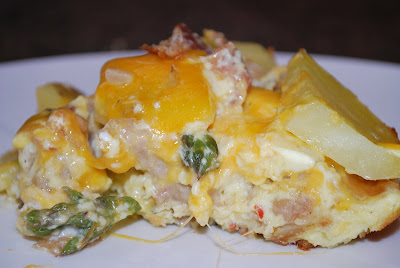 In the end, despite the chunks of green things in his breakfast food, even Kelly gave this breakfast dish two thumbs up. He suggested I make it again and only put veggies on half which is not a bad idea to appease the picky eater. I'd love to make it again and try some different things, but until then, I'm going to kick up my slippers because Kelly's got next on breakfast duty.
Posted by Missy at 8:19 AM