Healthy Option vs. Living Life to the Fullest 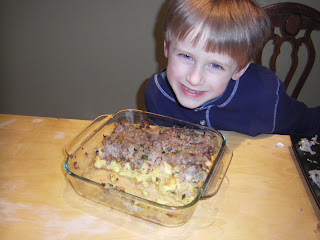 This recipe looked so easy at first glance even for this non cook that I did it the night it was posted. I had enough things in my cupboard to put together a lower fat version. I used low fat milk instead of half and half and I used vegetarian sausages (Morning Star is the best). I also cooked up some zucchini with the potatoes to add some veggies to the meal and left the skins on the shredded potatoes. I thought it was a decent casserole dish even for dinner.

Later in the month this part-time vegetarian bought the real sausage and half and half. I took the time to peel off the potatoes and cut the crust off of the bread. I even added some seasoned salt (thanks to Red Robin). Well it's probably no surprise but it was tasty, fluffy, and slightly greasy in a good way! Don't let me forget to mention that I also used a little, okay a lot of cheese (Flagship this is your shout out)! This version had such great taste, I could see it being a great remedy for a rough night.

I only wonder how you could prep this the night before so all you have to do is stick it in the oven in the morning. I have a tough time waiting the 40 minutes after I put it in the oven, after spending so much time prepping. Oh well I guess that is the joy of cooking I am trying to embrace! 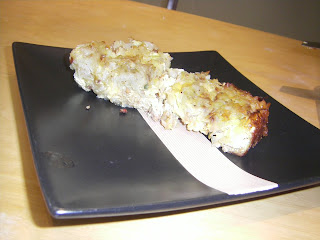