I had almost decided to let August quietly slip by without posting because there is nothing in me that wants to bake a pie -- ever. Then this little 4-ingredient recipe popped up in my Pinterest feed and since the word "pie" was in the title, it piqued my interest. Since chocolate was a main ingredient, I decided to go for it.

First, let's be honest. This little revolution of mini muffin versions of everything -- pies, casseroles, breakfasts and such -- is basically a cop out for lazy cooks like me who would rather not fuss with all the ingredients. Dumbed-down versions of the real thing. And I freaking love it, I'm not gonna lie.

As it turns out, you don't even need a campfire to make s'mores as long as you own a muffin pan. Throw away those dirty sticks; here's the recipe you've been waiting for... 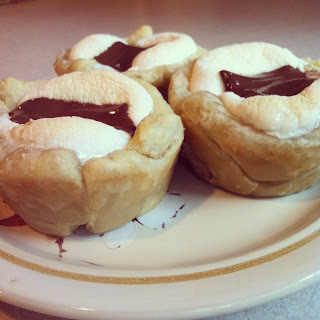 (For a half dozen muffin pan)

Note: You're going to eat some of the ingredients (if you're a human) so I took that into account with the measurements.

Preheat oven to 375. Grease your muffin pan. Cut a piece of your pie crust and fit it inside each muffin tin, pressing until it's just right, or you just give up. Break graham cracker into pieces so they fill a good portion of the cup. Leave room for about 3 rectangles of chocolate to layer on top. Put in the oven to bake about 5 minutes. Remove and then place a single marshmallow on top of each tin. Put back in oven for about 10 minutes, or until marshmallows start to brown a bit. Drop another Hershey piece on top just because you can.

Things to consider: 1) Using pie crust. My tiny grocery store did not have any so I was stuck with puff pastry. Still worked. 2) Substituting Golden Grahams cereal for the broken graham cracker. 3) Making a Nutella and crumbled Nilla Wafers version. You can thank me later.