In case you don't remember Catastrophy Wife from her previous guest blog post, we are happy to see her back!  It seems like not only is it Pie month but my high school reunion month in case you missed Miss Kirsten Hauge's guest post.   We all  were total dorks got in lots of trouble together back in the day.   Nice to see we all grew up and learned how to make pie!

This is Marni from CatasTrophy Wife and I'm here to write about PIE!!!  I have to admit that pie is not one of my favorite things and that's why I've never made a pie.  I know, I know.  But I'm really excited to share my pie-making adventure on Beauties and the Feast!

Needless to say, I didn't even know where to start.  Fortunately, I was invited to a dinner party where one of the guests loves Strawberry-Rhubarb Pie.  This gave me the direction I needed so I went to Pinterest and found this recipe from Smitten Kitchen.  And then the fun started. 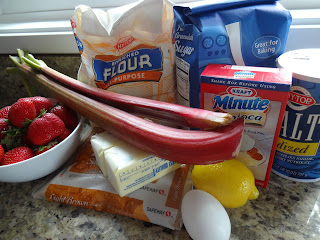 I started with the crust: 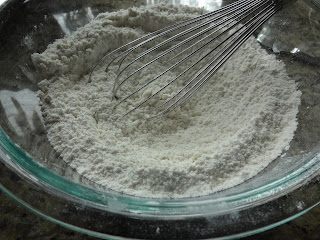 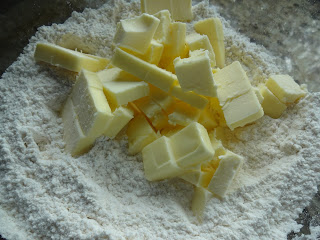 Everything went pretty smoothly until I added the butter.  I guess that's the same as saying it went smoothly for 2 minutes.  Because then I had to cut the butter in the flour... 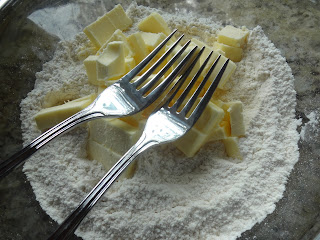 And I only had forks.  It wasn't difficult, it just took time...and I think I got carpal tunnel.  Eventually the butter was kind of pea-sized: 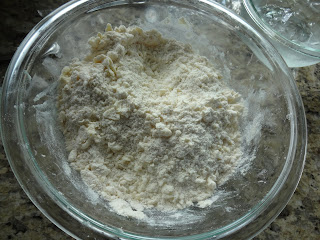 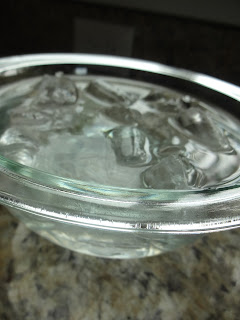 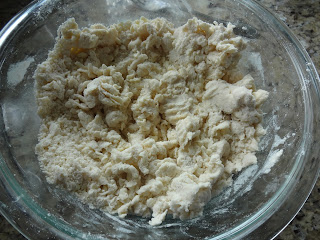 I mixed it all into a ball, separated it into two and threw it in the fridge for an hour 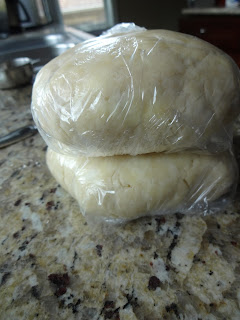 I was more excited about making the filling.  That is, until I realized I was using rhubarb.  Did I tell you that I've never used rhubarb before?  Well, umm, yeah.  Right before I started cutting into this bad boy: 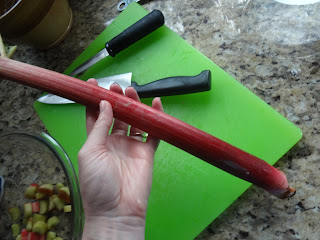 I decided to Google "preparing rhubarb for pie" or something like that.  Thankfully I did, because I didn't know I had to peel the outside layer of the rhubarb off before cooking it.  (I don't think peeling it is required, but I'm glad I did because I think it helped the rhubarb cook a little bit better.) 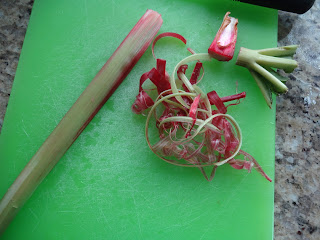 It kind of made me sad to peel off the outside because I loved the dark red color of the rhubarb.  When all the rhubarb was chopped, it still looked pretty nice, though. 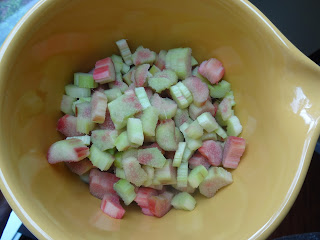 I bought some beautiful strawberries, sliced them up and threw them in with the rhubarb: 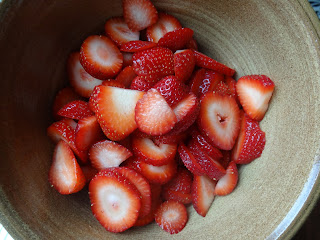 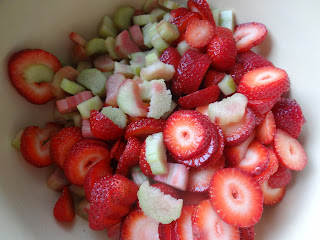 And then I added the sugars, the quick-cooking tapioca, lemon juice and salt. 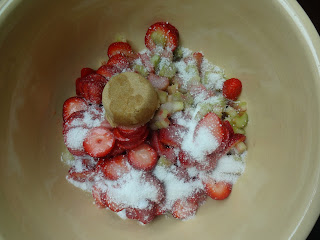 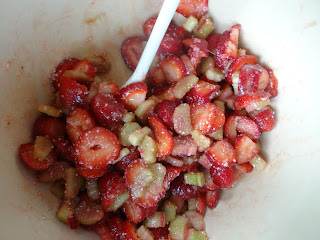 I set all that aside to let it marinate for a bit while I worked on the crust. 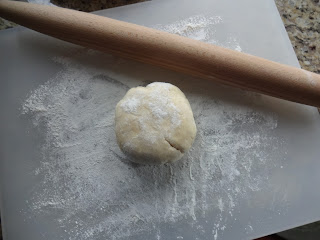 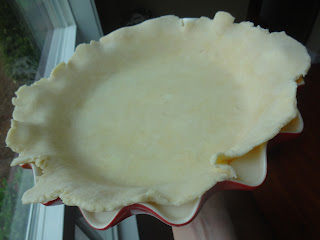 Then the magic started to happen.  I poured the strawberry/rhubarb mixture into the crust: 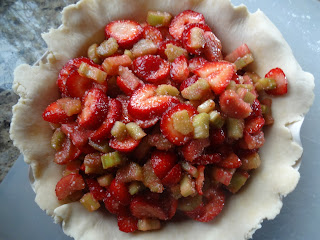 And it was so beautiful!!!  I added pieces of butter and the top crust. 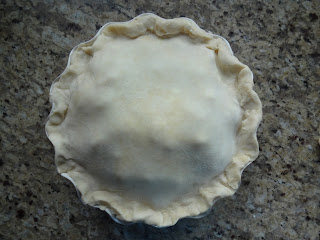 I used a pie plate that has a decorative edge and it made the pie look so dang nice (without any work)!!! 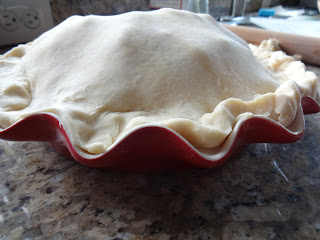 I brushed the egg wash over the top: 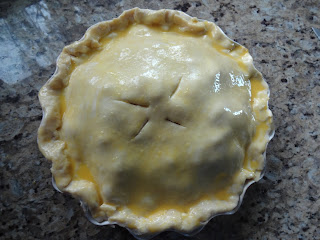 Put it in the oven and checked on it about every 34 seconds: 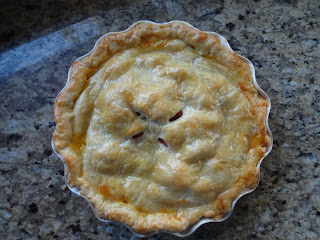 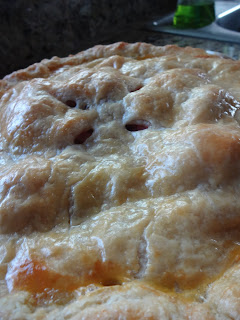 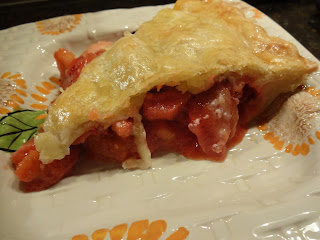 Some of the insides came out when I was serving it: 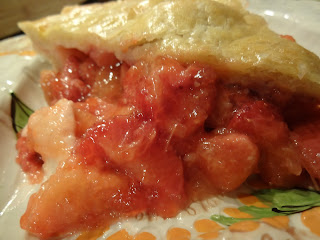 So I covered them up with some vanilla bean ice cream. 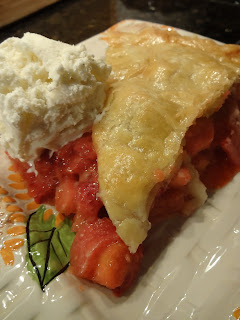 When in doubt, take a picture with your food: 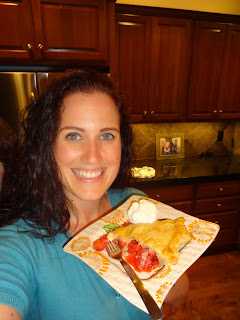 And then take a picture of your friends with your food: 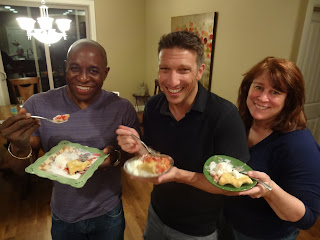 Then enjoy.  The pie turned out to be pretty spectacular.  The real pie expert at the dinner party loved it (and even kept a quarter of the pie for later!!).  Now go out and make a pie!!!
Posted by Megan My Day at 3:42 AM