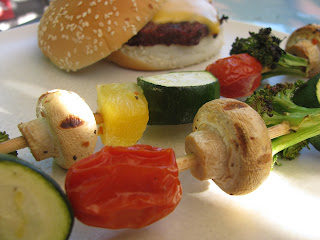 It’s a very interesting thing to watch toddlers turn into children. For one, they are ridiculously demanding and stubborn. But in between those terrible times, they are shining lights of individuality and genius. You can literally watch, with your own two eyes, as their personality develops. With my first child, we learned at age three that he was a real, true lover of cars. And sports. You know, typical things. But our second child, Asher, is quite different. From the very time he could stand upright he was drawn to the kitchen. Every house we went to for a play date provided a new Play Kitchen for him to explore and he would spend hours pretending to cook for us. I can easily coax him into getting into the bath if I tell him we’ll pretend we’re making a cake, and he’ll help me get the cake pan, the measuring cups and a rolling pin and we’ll bring them all into the bath.
He is also very creative with his food. At a restaurant he mixed his ranch dressing with apple sauce and dipped his fries in it. The waitress came by and said, “You’re letting him do that?” to me, to which I responded, “Of course!” Jerk. One of his favorite concoctions is a turkey sandwich with pretzels. And he does not mean a side of pretzels. Tonight I asked him if he wanted BBQ Beer Brats (post coming later) and he said, “Can I have chips in it?” And just a couple of days ago he woke up and went straight to the cupboard, pulled out the bread, the craisins, and at the fridge he grabbed the cream cheese. “You want toast with cream cheese and craisins on top?” I asked. “Yep!” He totally made that up!
So when Asher turned three, and his friends’ parents asked what he wanted for his birthday I said, “Fake Food!” and we got it. We got a shopping cart (in girl colors, because there aren’t any other kind. As if fathers and single dudes don’t shop; come on!) and a pile of veggies and fruits that he can use a wooden knife to cut apart, and then there’s his favorite: a wooden BBQ Shish Kabob maker! 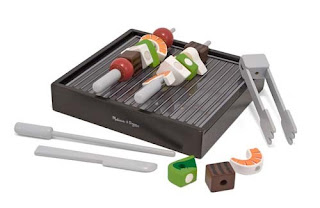 “Shish Kabob” is my favorite game because it enables me to sit on the couch. Here’s how it goes: I sit there, with my feet up and Asher comes to take my order. “WHAT YOU WANT!” He shouts at me. “A Shish Kabob, please,” I respond. I have learned only to ask for one, otherwise, as Asher says in exasperation, “You can’t have two or the teacher will tackle you!” Which really doesn’t make much sense but it’s the funniest thing I’ve ever heard so sometimes I ask for two even though I know it will make him mad. 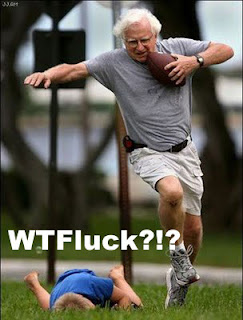 After he gives me my Shish Kabob he stands there and watches me pretend to eat it. “Delish!” I say. One time I asked him how he would like me to address him. “Chef Asher, or Chef Asbjornsen?” I say. “Just Chef.” He says. Ok.
So in honor of Chef, I am posting my recipe for BBQ Veggie Shish Kabobs. I couldn’t be more proud of my little future culinary genius. Move over, Beauties, we’ve got a dude preparing to join us.

BBQ Shish Kabobs
I grabbed a bunch of different veggies that were already bite sized and ready to stick on a stick. Things like mushrooms, mini-tomatoes, broccoli and pineapple. I also bought a zucchini and sliced that up. I have wooden sticks for shish kabobs so I soak those in water while I do the prep so they don’t burn right up on the grill. And then I coat the veggies in marinade and let them soak it all up for at least a half hour. If you plan ahead, do this overnight!
Stick all the veggies on and grill! Easy peasy. This would also make a really easy and quick weeknight meal. 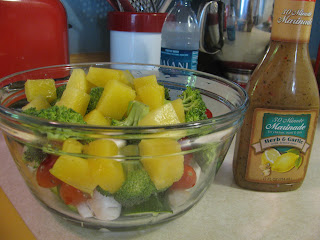 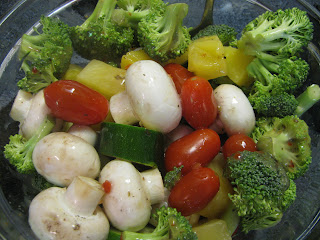 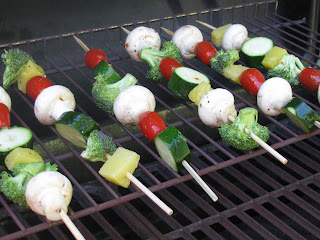 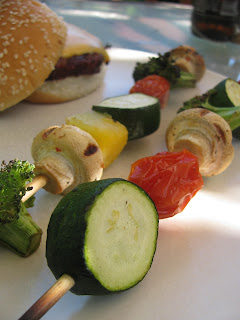 Asher and Ansen love Shish Kabobs because they pretend to make their own all the time, though I have to admit they didn’t like these ones. Too many veggies. That burger you see in the background wen't pretty fast, though.
Posted by Amber A at 12:01 PM