NEW favorite! And it's not even a slow cooker meal (shocking).

It's been a while since I've made stuffed peppers and it is such an easy, well-rounded, delicious dish -- it's kind of the perfect weeknight meal. So I made them last night and here's how it went down: 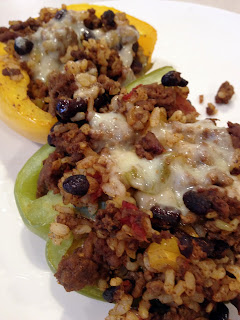 Slice the top off your pepper and de-seed. Rinse it well. Slice into two halves. Pop the stem out of the top and chop that little bit of pepper to use in your meat mixture (waste not!). 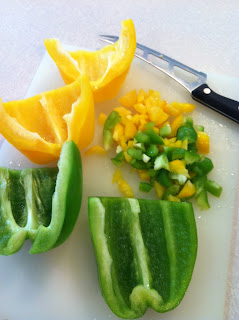 Brown the ground beef, drain. Then add everything but the cheese. Toss in your extra pepper chunks. Cook the rice and add that in too. Let everything simmer for 10 minutes, stirring occasionally. 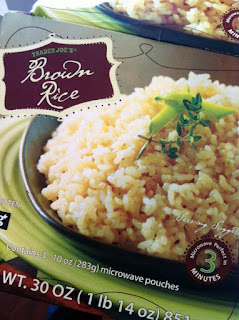 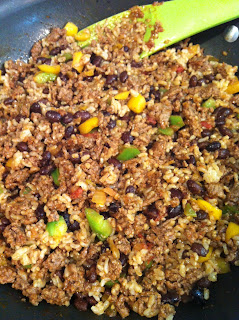 Put your pretty peppers in a pan and fill them up with your meat mixture. Bake in the oven, covered, on 375 for 45 minutes or until peppers are desired tenderness. Sprinkle with cheese during last 5 minutes of baking. Devour. 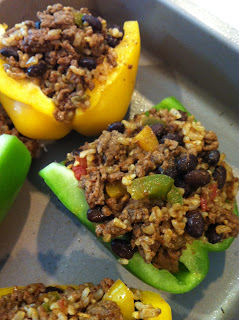 Now, here's the thing: You'll notice as you keep adding to your meat mixture that it gets to be quite a lot, probably more than you need for your peppers. So I would say it fills 6-8 pepper halves, if you have a few more mouths to feed than me. I had 4 pepper halves and then plenty of leftover meat mixture that I'm sure tonight we'll be adding sour cream and making burritos for dinner. Bam! Another 2-in-1 meal just like that. Also, you can break this operation into two parts. Make the meat mixture early on and stuff the peppers, put them in the fridge. Wait for the fam to get home in the evening and then pop them in the oven to bake. Easy enough, right?