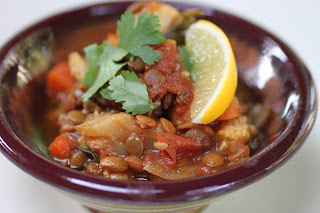 The other day Murray and I joined our favorite neighbors Joan, her daughter Jenn and Murray's bff, Maggie the yellow lab, for a walk and as usual we talked food while we walked. The girls called me out for my lack of posts on Taco Tuesday (right, I've been meaning to get back on top of that) and then told me about their recent cooking adventures and plans. Naturally I asked for their recipe and convinced them a guest post for soup and stew month would make our fan club (it's out there, right?) really happy! They came through!

I’m what you might call “accidentally vegan,” since my daughters turned pescatarian and vegetarian on me over the last year, and they have befriended vegans and people with allergies to dairy products and eggs.  I’m a huge fan of slow cooking, because everyone can eat when they want, and leftovers abound to take to work or school.  I briefly considered writing a book called “365 Days of Vegan Slow Cooking,” but I ran out of steam on day four.  This recipe, for Moroccan Lentil Soup, is from day two.

I don’t like vegan recipes that say they “taste like” chicken, beef, etc. – it’s vegan, for crying out loud, taste like the ingredients!  This is a tasty meal and it makes a lot.  The leftovers are great and can be frozen, or you can just cut the ingredients in half if you aren’t feeding a crowd.

I’m a neighbor of Emily’s and honored to be a guest poster on this auspicious blog! 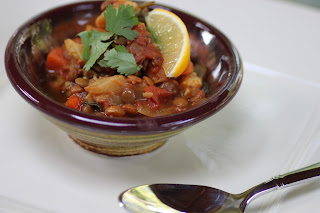 Heat all in a soup pot over medium heat, add onions and carrots and cook until somewhat softened, about 10 minutes.  Stir in garlic, add cumin, coriander, turmeric, cinnamon and pepper and stir until fragrant.  Add broth, cauliflower, lentils tomatoes and tomato paste.  Bring to a boil, reduce heat and simmer partially covered , stirring from time to time until the lentils are tender but not mushy.  Stir in spinach and cook until wilted, 5 minutes.  Just before serving stir in cilantro and lemon juice.

Slow Cooker:  Place all the ingredients except spinach, cilantro and lemon juice in a 5 quart or larger slow cooker, stir.  (I put in enough vegetable broth and water to cover everything but not a lot more.)  Cook until lentils are tender (4-5 hours on high or 8-10 hours on low).  During the last 30 minutes stir in the spinach.  Just before serving, stir in the cilantro and lemon juice.