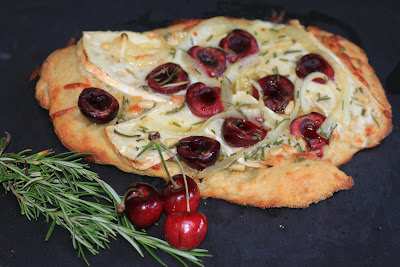 When we do pizza night I like to experiment so I usually balance out one non-traditional pizza with a regular ol’ pepperoni just in case pizza number one isn’t amazing. Friday night I went out on a limb and made a pizza fitting for my rosemary post and another to enter into Whole Food’s berry recipe contest... and these weren't your ordinary pizzas!

Then I got nervous that Curtis would turn up his nose at both, so I did a third pepperoni, just to be safe. Yes, three pizzas for two people. That's how we roll. Then we voted and here were the results: 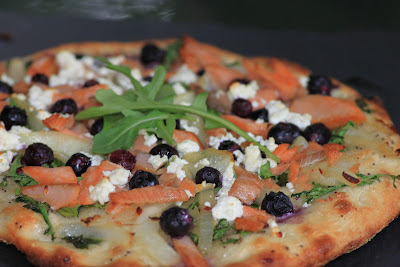 I wish the cherry, brie & rosemary pizza would have made a clean sweep, but I’m happy Curtis liked it much better than he anticipated and gave it his number two vote! It was not only pretty, but a really incredible flavor combination and the rosemary shined. I can’t wait to make this again!

We ate this pizza / flat bread for dinner (obviously) but it would also make a fun appetizer. Or you could take the same concept and make a pretty simple bruschetta: sliced and toasted baguette topped with brie, ½ a cherry and a sprinkle of rosemary and then broiled for a few seconds.

What are your favorite pizza toppings?

Directions
Preheat your oven to 500 degrees (with a pizza stone or tile inside, if you have one).

Meanwhile, melt butter in a skillet and add onions. Cook on low for about 20 minutes, stirring occasionally. Onions should be a deep brown and caramelized but not crispy when finished (If you want to cheat, add a little brown sugar, salt and red pepper flakes… and you’ll have perfectly caramelized onions!)

Simmer balsamic on medium heat for 3-4 minutes until it is a syrup consistency. Set aside. (I just used aged balsamic and forgot to drizzle it on until after Curtis took the pictures, but it was a delicious addition!)

Take a piece of foil and spray with cooking spray and sprinkle with cornmeal (to keep the crust from sticking). Spread the pizza dough out by pushing it with your fingers, no need to use a rolling pin. Brush olive oil over dough and sprinkle with a little garlic salt. Put the crust (still on the foil) on the pizza stone and bake for 3 minutes. Remove from the oven and lay the slices of brie over the dough. Pile on cherries, caramelized onions, pine nuts and sprinkle with fresh rosemary. Bake an additional 8 minutes or until the crust is golden and the brie is bubbly.

Remove from the oven and garnish with extra rosemary and drizzle aged or reduced balsamic on it. Delish!

Posted by Emily Adamson at 8:36 AM