In my house opening a jar of Prego over penne is usually the way we go. If we want to get fancy, we stir in some pesto. If we want to blow your mind, we open a box of Cucina Fresca frozen penne mac and cheese, throw it in a Pyrex and take credit for it. No, probably not. But I'm tempted...if you haven't had Cucina Fresca macs, they are the bomb.com, plus they are local (to Sea-town) like Beechers, easily rival Beechers in flavor and claim to be handmade using natural ingredients. BAM! Why aren't I getting paid for this?

Since I couldn't open a box of frozen mac this time, I opted for this simple recipe from Food Network: Penne with Butternut Squash and Goat Cheese. The inspiration behind this choice is merely the fact that I had a package of pre-cubed fresh butternut squash (thank you QFC for helping me cheat) that I needed to use. So I searched "penne butternut squash" and this recipe is the first one I landed on. It had me at goat cheese.

The result: It was like I had ordered a dish at some fancy restaurant where you think the chef is really brilliant for combining these flavors that you, in a million years, wouldn't have considered. And it was EASY! My favorite. The only downside: my toddler gave it a thumbs down and I'm not surprised. It's a pretty sophisticated flavor with the goat cheese, besides, if it's not Prego, a banana or a Ritz cracker, he's not interested anyway.

Next time I'm going to add in some ground Italian sausage just to see if I'm as brilliant as a top chef. Thank you Amber, for making me think outside the (frozen mac and cheese) box this month! 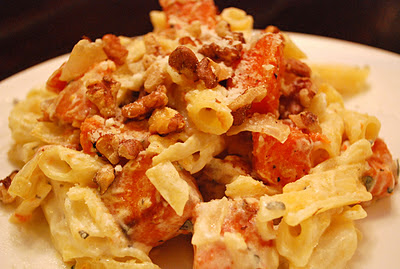 Put an oven rack in the upper third of the oven. Preheat the oven to 425 degrees F.

Mix the squash and onion together and arrange in a single layer on the prepared baking sheet. Drizzle with olive oil and season with salt and pepper, to taste. Bake for to 40 to 45 minutes until the vegetables are golden and cooked through. Remove from the oven and set aside to cool slightly.

While the squash mixture is cooling, bring a large pot of salted water to a boil over high heat. Add the pasta and cook until tender but still firm to the bite, stirring occasionally, about 8 to 10 minutes. Drainand reserve about 2 cups of the pasta water. Put the pasta, goat cheese and 1 cup of pasta water in a large serving bowl. Toss until the cheese has melted and forms a creamy sauce. Add the squash andonion mixture, the walnuts and the basil. Toss well and season with salt and pepper, to taste. Garnishwith Parmesan and serve.

Cook's Note:
To toast the walnuts, arrange them in a single layer on a baking sheet. Bake in a preheated 350 degree F oven until lightly toasted, about 6 to 8 minutes Cool completely before using.

Missy's Note:
When toasting walnuts in a toaster oven, watch them carefully...