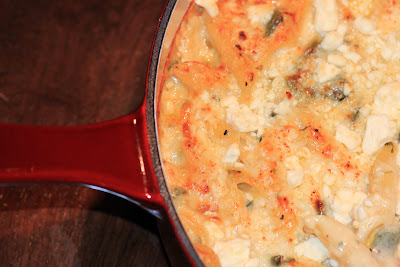 I was thrilled when Amber announced the secret ingredient for January is penne pasta. I know we’re all supposed to avoid or eat less carbs, but I will tell you, with pride, that I LOVE pasta and we eat it all the time!

I have a standard penne pasta recipe I make (quite often) that consists of Italian sausage, caramelized onions, mascarpone cheese, broccoli, bell peppers and lots and lots of Parmigiano-Reggiano. Fortunately, Curtis likes this dish as much as I do. But since this blog is about broadening our horizons, I decided to try a new recipe.

When Megan posted her recipe for Honeycrisp Apple Sangria, she introduced me to yet another food blog which I’m now following: Nutmeg Nanny. In Nutmeg Nanny’s 2011 round up she posted this poblano pepper macaroni and cheese recipe as one of her top 10 recipes of the year.

Not only was this obviously a top recipe but I was intrigued by adding chilies, lime zest and cilantro to mac n’ cheese. I love the idea of putting a Southwest spin on one of the best dishes known to man (and woman). And I also loved that Nutmeg Nanny made her mac n’ cheese in a cast iron skillet vs. a square baking dish. Makes for a much better photo opp and presentation!

Next time Curtis has his smoker fired up, I’ll pop a couple of poblano chilies on to soak up a smoky flavor for smoked poblano penne and cheese. But this time, as I followed the recipe and broiled the poblano peppers I was instantly transformed back to freshman year of college. The two boys who lived across the hall from us (now lifelong friends) were from Santa Fe and they’d cook chili peppers and who knows what else in their dorm room and stink up our entire floor!

My favorite cheese to use for macaroni and cheese (and for everything else, really) is Coastal Cheddar. But when I was at Costco picking it up, I noticed they also had Beecher’s No Woman, so I grabbed a block of that too. Since this recipe kicks it up a notch, I figured spicy cheese would only add to it! 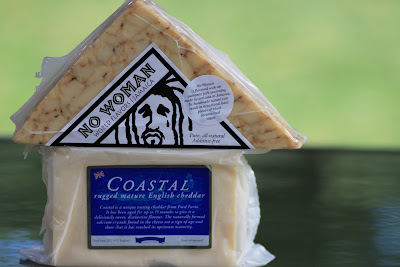 The verdict? Really good! Curtis named it as one of his top three macaroni and cheese recipes (although I think Beecher's and the leek recipes may fall into 1st and 2nd place). It had some spice and good flavor. I gave Curtis the option of salad or broccoli on the side and he picked broccoli (guess he thinks like Ansen) and for dessert – the most important part - we had Costco pistachio gelato with homemade Kahlua hot fudge sauce (what New Year’s Resolution???). 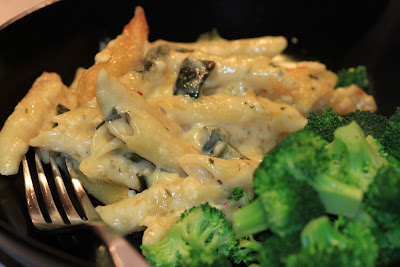 Roast the poblano chilies under the broiler until blackened, about 5 minutes per side. Place the chilies in a paper sack or plastic food-storage bag, close it tightly, and let sit for 20 minutes. Take the chilies out of the bag and rub off the skin – I wore gloves, and this step is kind of fun! Remove the stem and seeds and chop the chilies into 1-inch long pieces (make sure you get all the seeds out, I left a few in and they are H-O-T-hot!).

Bring a large pot of salted water to a boil and add the pasta. Cook al dente (about 6 minutes); it will cook more in the cheese sauce in the oven. Set aside.

Preheat the oven to 375. Grease a large baking dish or a large cast-iron skillet.
In a pot (you can use the pot the pasta cooked in or you can do this while the pasta boils), on low heat melt the butter. Add the garlic and cook for 1 minute. Whisk in the flour and cook until a light brown, toasty paste is formed, about 1 minute. Whisk in the milk and stir until it’s thickened a bit but still fluid, about 1 to 2 minutes. Remove the pot from the heat and stir in the mustard powder, cayenne, cumin, lime zest, cilantro, and chopped poblano chilies. Adjust seasonings and add salt and black pepper.

Slowly add half of the cheddar cheese and stir until it’s melted and well combined into the sauce. (If the sauce has cooled too much and the cheese won’t melt, return the pot to low heat on the stove seems a little thick return it to the stove until soft again. If however, the sauce gets too thick, like custard, you can thin it by stirring in milk, a teaspoon at a time.)

Mix the pasta in with the sauce and pour it into your baking dish or cast iron pan. Sprinkle the remaining half of the cheddar cheese over the top and bake uncovered for 20 minutes or until brown and bubbling. Sprinkle with feta cheese, broil for a minute or two, and serve immediately.