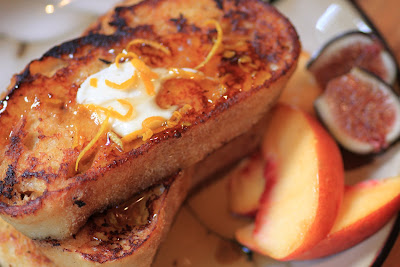 I realize you’re probably recovering from Thanksgiving and may never want to think about food again, but December is going to be filled with family and friends and it won’t hurt to have a delicious breakfast recipe up your sleeve.

One of my best friends, Amy, is married to the head chef at Dahlia Lounge (one of Seattle’s finest restaurants, in my humble opinion) so she has an in when it comes to their super secret recipes, and this recipe is just one of their many French Toast recipes. She’s made this for us a few times and it’s by far the best French Toast I’ve ever had. The orange flavor really takes it over the top. So I asked if was ok to blast the recipe out to blog land and she replied “go for it”!

I made this for the beauties for breakfast during our October retreat after a big Saturday night out, and it was a huge hit! Huge. We also had chicken apple sausage, nectarines and fresh figs. 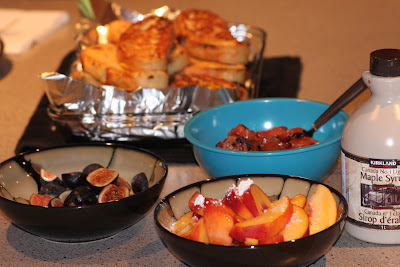 And because the morning after the night before can be rough, we had these to help us cope. 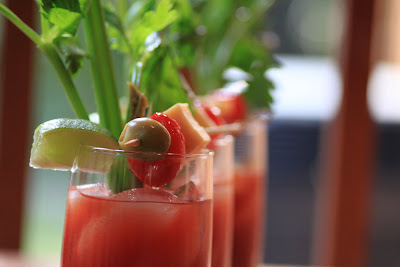 I really just like Bloody Mary’s for all the flair … my favorite garnishes these days are smoked Gouda, salami and sweet piquant peppers. And pouring in a tiny bit of aged balsamic vinegar is also divine. 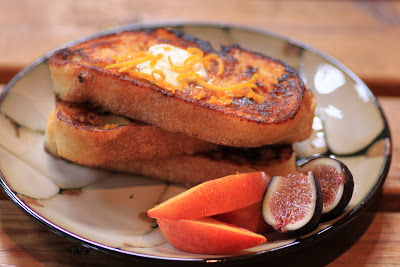 Directions:
Slice the bread. Mix the eggs, half and half, orange juice, zest, maple syrup and cinnamon. Soak the bread in the egg mixture for 30 minutes. Cook on a griddle or in a frying pan and top with butter and maple syrup.

What are some of your favorite breakfast dishes to make during the holidays?
Posted by Emily Adamson at 9:42 AM