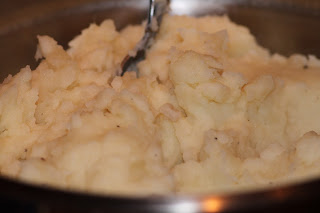 Seems as if the history of the mashed potato began in 1771 I know! I'm such a nerd—I like to research the history of food! when a French man named Antoine Parmentier came up with the idea of having a competition on ways to make potatoes. Shut up, this is interesting! He won first place and decided to start his own crop, which he had soldiers vigilantly guard. But some sneaky peasants outsmarted the guards and as a result of their potato thievery, potatoes were introduced into the cuisine of France and, much later, widespread Europe.

We're all hopefully familiar with the blight of 1845 which caused the Great Irish Famine. Though there are currently over 5,000 varieties of potatoes, the limited number of varieties initially introduced left the crop vulnerable to disease which resulted in crop failures killing nearly 1/3 of the Irish population from starvation and causing mass emigration from the country. So while I don't mean to depress you this Thanksgiving I do hope that when you make this T-day staple you take a moment to remember the history of the potato and be thankful. It's a powerful little spud. 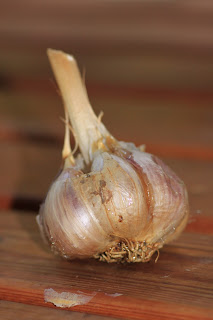 Ehem, on a lighter note: you can't screw up mashed potatoes so if this is your first time contributing a dish for Thanksgiving, choose this one. Follow my recipe for Roasted Garlic Mashed Potatoes and you'll look like a 5 star chef, for like, barely any additional effort at all. But by all means if you don't want to look like a 5 star chef, leave out the garlic part and stop complaining about how I’m making this too hard for you. Oh, and despite there being over 5,000 varieties of potatoes, the best potatoes for mashing are Russet, Yukon Gold or Red. That’s important.
Ingredients
1 medium potato per person peeled and quartered
1/2 cup or more milk/cream
1 stick butter (use 1/2 stick if you have 6 potatoes or less)
1 tablespoon salt, or more to taste
2-3 full and glorious heads of garlic
Directions
Warm oven to 375 degrees. Wrap each head of garlic in tinfoil and bake for 45 minutes. (Don't let the large number of roasted garlic scare you. When you roast garlic it ends up being much milder in flavor so the more you have the better.) Remove from oven, unwrap and let cool. Your house will smell SO GOOD! Bring a large pot of water to boil and add potatoes. While potatoes are boiling, peel cloves of roasted garlic and put aside in a small dish. Stick your face over the boiling potatoes for a nice steam bath and pore deep cleaning. Boil potatoes until you can stick a fork in the center of one of them easily. Drain. In a kitchen aid mixer, or large bowl w/masher, mash potatoes with milk or cream, butter, salt, and roasted cloves of garlic.  Add more milk or cream if desired mashy-mooshiness is not yet achieved.  Also, thanks a lot spell-check: if I hadn't eagle-eyed that last sentence it would have read "roasted gloves of garlic." And don't even get me started on researching what that means.
Anyway, after they're done you'll want to smother them with homemade gravy.  Click here for the BATF Gravy recipe. Yum!
Additional add-ins: shredded cheddar cheese, sour cream, chives, bacon, and fresh herbs such as rosemary or thyme. Don't over-flavor them, though if you plan to smother them with the BATF gravy recipe.  Yes, that's the same link as above but I just wanted to make sure you saw it.  There's no use in making 5 star mashed potatoes if you put canned gravy on the top.  I'm serious.  Don't even think about it.
Making your spuds ahead of time? Put them in an oven-safe dish with a lid and refrigerate. Pop in the oven with the lid on about 30 minutes before dinnertime to heat.
Posted by Amber A at 2:51 PM