My family moved to Washington from Nebraska when I was 16 years old which meant starting all over at a new high school my junior year (yes it was torture, thanks a lot mom and dad). Fortunately when no one else wanted to be friends with the "new girl", CatasTrophy Wife became stuck with me. She uses her blog, CatasTrophy Wife (CTW), as a place to unleash her humor. And let me tell you, as long as you're not easily offended, she is hilarious! Her blog posts constantly have me laughing out loud. And the reason we get along so well? Her love for food! She graciously offered to share her humor and baking skills with Beauties and the Feast.

Anytime you need a good laugh, all you have to do is check out her blog! Enjoy. ~Megan

Hello out there to all you Beauties and the Feast-ers!! I'm CatasTrophy Wife and I'm so excited to do a guest post on BatF! 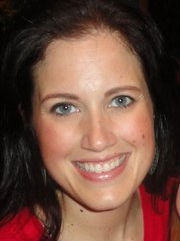 First, I thought I'd give a little background about myself. I went to high school with the Beauty, Megan (most people are surprised I had any friends at all), went on to college and then to law school where I barely graduated!! I now live in the Willamette Valley in Oregon with my old man husband (G/George), dog and cat (aka "the creatures"). 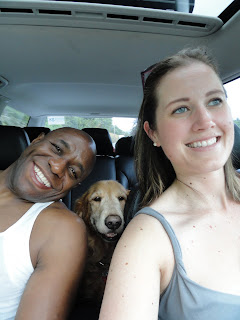 I was thrilled when The Beauties asked me to do a guest post, but had no idea what I'd make. I love baking and mostly bake cookies and bars. I don't know if I've ever made a cake from scratch and I don't really like milk. That being said, I decided to make a Tres Leches Cake, that's right, a three milks cake. I know, I like to make life as difficult as possible for myself. I found a recipe on one of my favorite sites, The Pioneer Woman. You can find the recipe here: Tres Leche Cake. I pretty much want to be her, minus the kids and the farm living. Mostly the cooking, eating, traveling and TV appearance part. Oh and she has her own show on the Food Network now...I'm so jealous. Ok, now on to the Tres Leches Cake!!! I started this recipe and immediately became scared because there was a lot of whipping involved. First up, egg yolks and sugar: 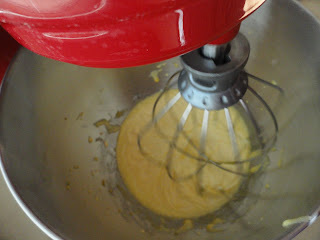 Fortunately, that part was easy and you just combine that mixture with the dry ingredients. I felt pretty good at this point. Then I had to whip the egg whites. Whipping egg whites scares me because I'm always afraid I won't whip them enough. But I threw my fears to the side and just started whipping. 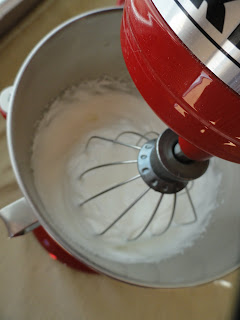 And they looked good. I kept beating them because The Pioneer Woman says to beat them until they are hard, but not dry. I don't really know what that means, though. When they started to look hard, I stopped. And then realized that they kind of looked dry. But I decided to use them anyway and combined the whites with the yolk, sugar and dry ingredients mixture. 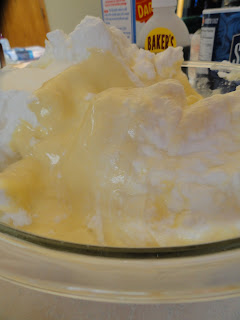 I began to get a little worried: 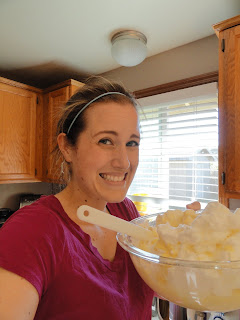 But I kept going. I folded the batter a lot to try to reduce the chunks of egg white. This appeared to help and it was pretty much smooth when I put it in the oven! One point for me. 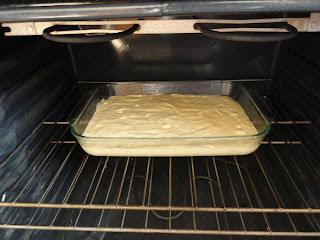 After it baked for 35 minutes, I took it out and turned it onto a rimmed cookie sheet (I don't have a nice platter like The Pioneer Woman because I'm white trash). 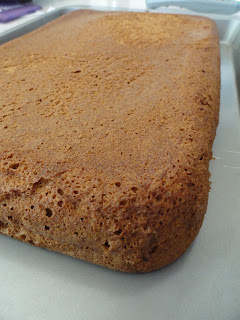 Once the cake cooled, I poured the three milk (evaporated, condensed and whole milk) mixture over the cake and let it soak for about 30 minutes. I didn't take any pictures of this part because I forgot...I know, I'm a disaster. After the cake soaked up all that milk, I whipped the whipped cream (see I told you there was a lot of whipping). After the egg white fiasco, I paid really close attention to the whipped cream and it turned out beautiful! 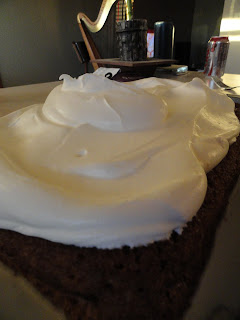 And I always believe that a frosting picture looks best with a harp in the background! So after frosting, G and I were ready to pig out. 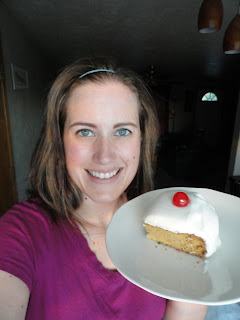 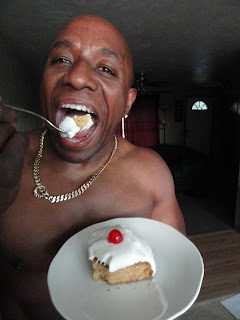 And this cake was good! You must try this recipe. I followed The Pioneer Woman's recipe exactly, but when I make it again, I will pour the entire mixture of milks on top (she suggests leaving out about 1 cup) and I will let it soak a little bit longer. I think the cake will be more moist, although it was still excellent. And just look at this masterpiece: 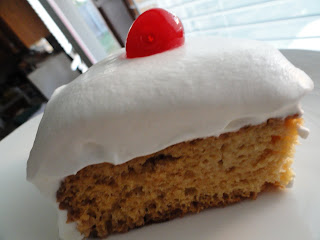 Here's the complete recipe, enjoy!! Thanks Beauties!! Ingredients:
_____
Instructions:
Preheat oven to 350 degrees. Spray a 9 x 13 inch pan liberally until coated.
Combine flour, baking powder, and salt in a large bowl. Separate eggs.
Beat egg yolks with 3/4 cup sugar on high speed until yolks are pale yellow. Stir in milk and vanilla. Pour egg yolk mixture over the flour mixture and stir very gently until combined.
Beat egg whites on high speed until soft peaks form. With the mixer on, pour in remaining 1/4 cup sugar and beat until egg whites are stiff but not dry.
Fold egg white mixture into the batter very gently until just combined. Pour into prepared pan and spread to even out the surface.
Bake for 35 to 45 minutes or until a toothpick comes out clean. Turn cake out onto a rimmed platter and allow to cool.
Combine condensed milk, evaporated milk, and heavy cream in a small pitcher. When cake is cool, pierce the surface with a fork several times. Slowly drizzle all but about 1 cup of the milk mixture—try to get as much around the edges of the cake as you can.
Allow the cake to absorb the milk mixture for 30 minutes. To ice the cake, whip 1 pint heavy cream with 3 tablespoons of sugar until thick and spreadable.
Spread over the surface of the cake. Decorate cake with whole or chopped maraschino cherries. Cut into squares and serve.
Posted by Megan My Day at 1:27 PM