Kelly just celebrated another birthday so I decided as a belated birthday gift to him I would post a recipe for his favorite dessert in his honor - cheesecake! (Move over Safeway bakery...) Plus, it's time for a dessert to be featured, because really, Jolie's fab cookie recipe doesn't count when it's something I'll eat for breakfast, snack, 2nd snack....

I found the recipe below in the Delicious Living magazine, a little freebie I picked up at the doc's office. So go to that site if you want to salivate over beautiful photos of cheesecake; mine haven't been cooked yet. And I'm thinking there are plenty of ways you can revise the recipe (I plan to dumb it down, of course) so I'm interested to see what you Beauties do with it. Enjoy!

2. Finely grind graham crackers and almonds in a food processor. Add butter and process until mixture forms moist crumbs. Press mixture into bottom of prepared dish. Chill until ready to use.

3. Combine cream cheese, honey, and sugar in a large food processor and process until smooth and creamy (or beat with an electric mixer). Beat in yogurt. Beat in eggs and egg whites one at a time, until well blended. Pour batter over crust.

4. Place an ovenproof bowl of warm water on lower oven rack. Place cheesecake on middle rack and bake, undisturbed, until set in center, 45–55 minutes, being careful not to brown top. (Cheesecake will still jiggle in the middle but will set as it cools.) Remove from oven and let cool completely.

5. Using foil overhangs, carefully remove cheesecake from pan and transfer to a cutting board. Cut into 2x2-inch squares, being careful not to cut through foil. Carefully lift each square away from foil and transfer to a serving platter.

6. In a small saucepan, warm preserves and 1 tablespoon water over low heat, stirring constantly, until melted and bubbly. (Or warm in microwave on lowest setting.) Arrange 3–5 berries on each square. With a pastry brush, brush berries with glaze. Serve at room temperature or refrigerate until cold. 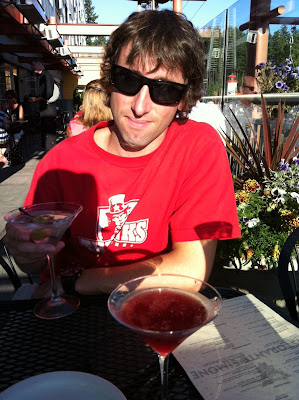 Oh and because you know how I like to post random photos, here's the hubby with his long hairdo and a birthday drink. How do we like it? Total keeper hairdo, right?
Posted by Missy at 9:02 AM