I basically followed the recipe, if you can call it that when you don't measure anything out. Measuring takes more time and effort (whiiiine), and really, who wants to wash another measuring cup? So I didn't measure a thing, although my trusty 1/4 cup hung out beside me willing me to use it. I decided much faster and more exciting to be risky and just eye it. As a result, I'm pretty sure I used more tortilla chips, garlic and pretty much more of everything than what the original recipe called for.

The other semi-important thing I did was go non-dairy on this one. In fact, I used turkey breast from Whole Foods, gluten-free rice penne pasta and soy-alternative Mexican cheese blend. I also used a big dollop of non-dairy mayo instead of an egg for binding. 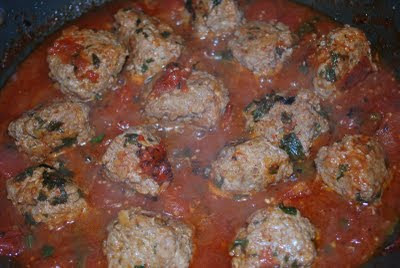 Since I used turkey I let the meatballs simmer on low about triple the time so they could really soak in the flavor. I probably would've gone longer but I had an impatient, hungry husband on my heels. Finally, I didn't add much water to the sauce. 1/4 cup maybe? Nah, didn't measure that either. I let the sauce thicken and I cut up the meatballs during the last few minutes of simmer/stirring so it ended up being more of a meat sauce over penne dish. 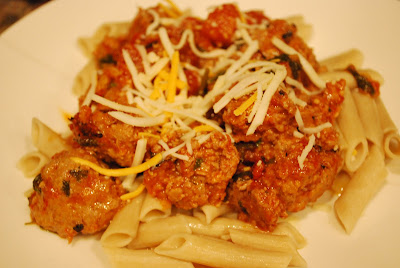 The result was surprisingly awesome! My husband said it best: "I don't feel like this is so heavy but it's really flavorful." My thoughts exactly. And the other kick I'm on right now besides less dairy (less, not non) is herbal teas, so for dessert I kicked my feet up and sipped on some Kava tea. 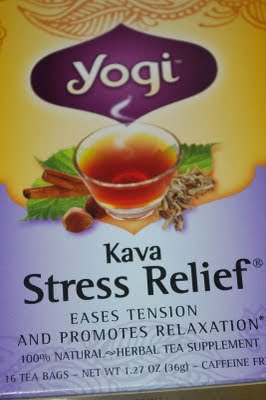 This recipe was too easy, too yummy and too healthy not to make again. Great pick Rach!
Posted by Missy at 8:10 PM