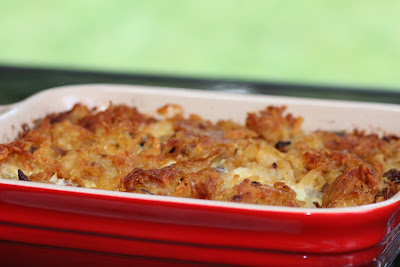 I love weekend breakfasts! Growing up my mom always made something fabulous like a savory egg dish on Saturday and sourdough pancakes or crepes on Sundays. Now that I’m an adult, if we’re actually home on a weekend, my mornings usually consist of sleeping in (I savor this big time since “sleeping in” is a foreign concept to all my friends with young kids), brewing a pot of coffee and then making a big breakfast. Favorites include pancakes, Costa Rica Breakfast (our version of Gallo Pinto) and oatmeal. But I love potato, egg and meat dishes, so I was thrilled when Missy’s March recipe included all three and was appropriately St. Patrick’s Day themed!

When I cook I usually make enough food to feed ten people even though there are only two of us. So my first instinct when I read the recipe was to rein it in, cut the recipe in half and just make one pie. I mean really, how would Curtis and I get through two egg casseroles? But then the real me came out and I realized two casseroles meant the opportunity to try two different versions!

Anyone else might look at this and think to mix up the meat. Try ham, bacon, prosciutto or pancetta. But not me. I LOVE sausage. I buy Safeway brand Italian sausage and that’s my go-to for breakfast dishes, pasta dishes, you name it.

Version 1 had a Mexican Twist: I used Coasted Cheddar Cheese and then added black beans, green chilies and a bell pepper. We had sour cream, salsa and hot sauce on the side. 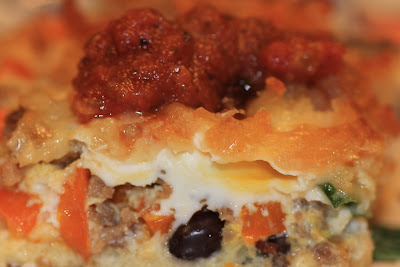 Version 2 was a bit more streamlined: I just added in goat cheese and caramelized onions. I think leeks would have been good as well. And in hindsight, I wish I would have thrown in a few sundried tomatoes. 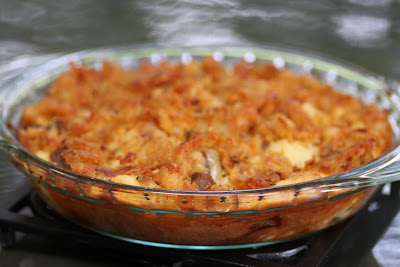 The verdict? Both were delicious, but Curtis and I liked the Mexican version best.

And because it was Sunday and we had a big day of chores ahead of us, we decided to pop a bottle of champagne to have with our brunch. Curtis added a little cranberry juice to mine and he had his straight up. It made our weekend projects a little more fun! 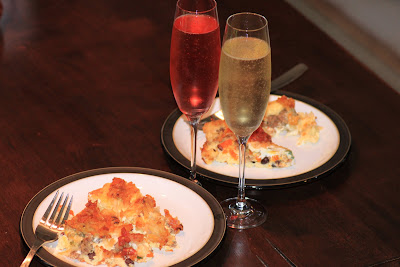 Next time I would mix in a pinch of dried mustard and red pepper flakes and make this the night before and refrigerate it. Then in the morning all I’d need to do is pad downstairs in my blue fuzzy slippers, pop the casseroles in the oven, make a pot of coffee and eat! Perfect way to start the weekend!
Posted by Emily Adamson at 9:20 PM