Merry Freaking Christmas!!!   I can't believe it is already December.  It is especially hard when it is 80 degrees outside but I still manage.  As previous posts have discussed, we were able to get together and have a little celebration when I FINALLY made it back to Washington.  It was so amazing and it was so hard for me to leave…..

In Amber's Salad Post, she called my drink Apple Cider Honey Bourbon.  This made me laugh out loud!   She seemed to have merged my two cocktails in to one.  I can't blame her.  You get seven girls with the gift of gab together in a room and cocktails tend to go down smooth and quickly.

But in actuality, it is two fabulous cocktails!   The first holiday cocktail is a Apple Cider cocktail.

My number one pick for this cocktail is Hangar 1 Spiced Pear Vodka but for the girls weekend I used Absolut Apple.  They both work perfect: Garnish:
Apple sliced on a Mandoline
Ground Cinnamon or half a cinnamon stick

Pour a liberal shot of vodka over ice.  Add Lemon juice, fill almost full with soda water, and add a splash of apple cider. Stir and garnish with a slice of apple and a sprinkle of cinnamon or half a cinnamon stick.  This is best in a short glass with a wide mouth so that the apple floats on top nicely.   It is best to pick out the smallest apple to use.  This gives it maximum curb appeal!  Enjoy.

I have to say that I blatantly stole this next recipe from my Florida family.  They are very famous (you can check out their beautiful photography Here)   They are also fellow world travelers and they have promised their version of this cocktail soon but after they get back from Jamaica, Italy, Paris….you get the gist.  But it is too good to save for now!  If you are a true bourbon lover, use one of your choice.  My personal choice is Makers Mark for cocktails but I used Jim Beam Honey for this version. 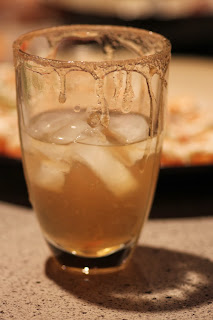 Pour a generous shot (or two) of bourbon over ice.  Add lemon juice.  A tip I use for making drinks is I use what I call a mixing glass.  I make the glass I am going to use to serve by putting honey on the rim and dipping it in the cinnamon & sugar that have already been mixed together.  I make the drink in a different glass with no rimmer on it and pour into it so it doesn't mess up the rim by stirring it or when you are pouring into it.  If you are having a few people over, I always juice lots of lemons before hand.  You can take short cuts and buy lemon juice but there is absolutely no replacement for fresh squeezed juice and you will probably be disappointed.

What would a weekend with girls be without a trip to the Brick????


FYI Missy - we have to do lots of retakes to get it right or else we just end up with pics like this: 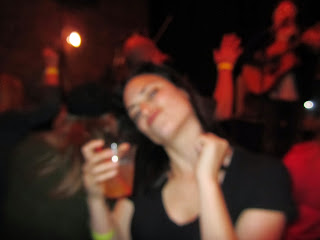