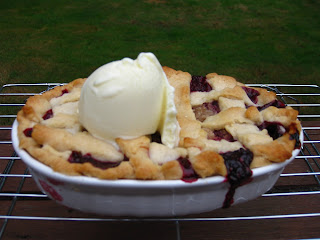 Pie is not my favorite thing to make. I love to cook and bake, but making pie crust has always intimidated me. Never mind one of my best friends, Melissa, has patiently taught me how to make her famous apple pie several times or that I took a great pie class and learned so many tips and tricks on making a perfect crust (hint: it's supposed to be very cold in your kitchen).

This August, my kitchen has not been cold (we're having an amazing summer!) but it's pie month and the blackberry bushes in my neighborhood are loaded so I have no excuse. I decided making mini pies would be fun because 1.) that means I wouldn't have to roll out a full pie crust and 2.) Murray and Graham don't find berry picking as exciting as I do, so I only spent a few minutes on our walk picking just enough berries for a few mini pies.

The verdict? The pie crust I made wasn't stellar (but it was easy), the berry filling was phenomenal and the crumble on top made it even better. Then loading our pies with ice cream and lemon curd whipped cream (lovingly delivered by our sweet neighbor Taylor - recipe below) was the cherry on top!

And my "mini" pies weren't so mini. They served about three people, but if you want individual servings, bake them in muffin tins like the recipe suggests. I also put a top crust on, but next time I'd leave it off and just stick with the crumble.


Muffin Tin
1 Prepared Pie Crust (I used this Never-Fail pie crust recipe)
4 Cups Fresh Blackberries
2/3 Cup Sugar
1/4 Teaspoon Sea Salt
1 Teaspoon Cinnamon
4 Tablespoons Flour
Crumble Mixture
1/4 Cup White Sugar
1/4 Cup Light Brown Sugar
1 Teaspoon Ground Cinnamon
A pinch of Salt
4 Tablespoons of Unsalted Butter, cut into cubes
3/4 Cup plus 2 Tablespoons Cake Flour
Roll the pie crust out on a floured surface, about 1/4″ thick. I used parchment paper to measure one of the muffin tin holes, but you could always just cut circles bigger than the hole. Cut out circles, and drop them into the tins, pressing the sides around the hole, just as you would a regular pie. Dock (use a fork to stab holes around the sides and bottom of the crust) the crust and set aside.
Heat the oven to 400 degrees.
Meanwhile, in a medium sauce pan add the blackberries, salt, sugar, cinnamon and flour. Cook over medium heat for 4-8 minutes or until thick and bubbly. Remove from the heat and allow to cool for a moment.
While the mixture is cooling, prepare the crumble mixture.
In a small bowl, add the sugars, cinnamon, salt, butter and flour. Use a pastry cutter to cut the butter into the flour/sugar mixture.
Spoon the blackberry mixture into each of the pies. Top with a little handful of crumble mixture and bake for 20-25 minutes or until lightly golden in color.
Allow to cool for 5-10 minutes, and carefully remove from the pan. Enjoy!!
Optional: Serve with ice cream or lemon curd whipped cream.
Lemon Curd Whipped Cream
Recipe from Taylor Clarke
THE LEMON CURD
yields some lemon curd, idk, depends on your eggs and lemon
Ingredients:
Instructions:
Zest your lemon. Separate your eggs. Juice your lemon. Mix your lemon zest, lemon, egg yolks and sugar in a mixing bowl. Preferably glass.
Bring a pot of water to simmer. Put your mixing bowl over it, double boiler style. Make sure the water in the pot (1) does not touch your mixing bowl and (2) doesn’t boil. Stir the curd as it cooks until it gets to a thicker consistency, like a thick salad dressing kinda. It takes a while and is annoying.
Take it off the heat. Stir in the butter until it melts. Cover it in plastic wrap so the skin doesn’t congeal and throw that puppy in the fridge.
THE WHIPPED CREAM
yields some whipped cream
Ingredients:
Instructions:
Whip with a whisk in a cold mixing bowl until peaks form. Mix in lemon curd.
Posted by Emily Adamson at 1:40 PM