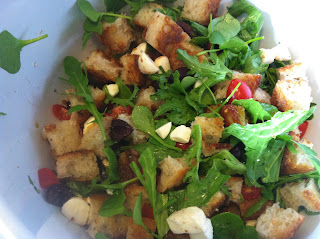 Bread.  Salad.  Um, yes, maybe not the most nutritious salad in the world, but has my vote for one of the most delish.

A few months ago I was trying to come up with something easy and delicious to bring to a book club meeting and my husband, Brock, suggested taking a bread salad.  (side note:  I have major anxiety about things like this and cooking in general  – Brock is the chef at Dahlia Lounge so sometimes feel like I need to turn up with something amazing.  I know that sound silly since he’s the chef, not me, but some people seem to think his “skills” would have rubbed off on my more.  Whatever. )  At first it seemed a little daunting (Dahlia has an amazing Tuscan Bread Salad they’ve had on the menu forEVER), but I decided to give my own version a try and found it was relatively quick and easy (done while my 10 month old was napping) and attempt #1 turned out quite well.  I decided to make it again to take to a 4th of July BBQ a few weeks later and had success again!  Emily’s had the book club and July 4th versions and asked that I do a guest post for BATF’s salad month, so here you have it.

I’ve since brought it to a few other dinners with friends since and each time have made a few tweaks.  I’ve finally found the dressing that I think I’ll go with 100% of the time (below) and I’ve decided that this “salad” or version thereof is now my official go-to when asked to bring a side and I’m excited to see how it can evolve with the seasons.

Optional:
4 oz. Kalamata Olives (I have to admit I omit these) – halved or quartered
Pine Nuts
Whatever you want – it may compromise the integrity, but I’ve added peas (English & Snap) and cucumber among other things…use your imagination

1. Make the Dressing – Combine the vinegar, mustard, shallots, thyme, and garlic in a bowl.  Slowly whisk in the oil in a steady stream until the dressing emulsifies.  Season to taste with salt and pepper.  (I put everything in a mason jar and shake, shake, shake)

2. Brown the Bread – put about 1/8” of Light Extra Virgin Olive Oil in a medium-hot skillet.  Add 2 to 3 bread slices flipping when golden brown and crispy.  You may need to add a bit more oil between flips and between batches.  As done – set aside on wire rack if you have one or stacked with as much air between them as possible so they don’t get soggy.  When cool – slice into 1” cubes.  (I’ve also cubed before browning - it took a bit longer to cook, but resulted in fewer crumbs.)**

3. Assemble – Layer in this order…Greens, Tomatoes, Mozzarella, Meat, Parmesan, (anything else), Basil, Bread (if you’re not serving right away – hold bread and basil out until ready to do so)

4. Drizzle dressing over toasty bread cubes so they all get some to soak up before tossing

* Earlier in the spring I used some greens from our garden – Peppercress, Arugula, Miners Lettuce and have used a mix of Kales – Russian, Curly Green, Lacinato.  I’d say use whatever you have/want, but something out of the ordinary is kind of nice.  If using a more tender green, and not serving right away, layer at top instead of bottom at assembly.

** OR if you have the grill up and running:  brush (or spray) slices of bread with Olive Oil and brown directly on the BBQ

I’ve been told that to remember that this salad “is all about the good stuff.  Bread.  Cheese.  Tomatoes.”  I must say I concur.

Thanks Beauties for asking me to post!
Amy
Posted by Emily Adamson at 9:27 AM