First of all, who knew Martha Stewart made any "quick" versions of anything? Second, thank you Martha for this fabulous version of Quick Moussaka!

I had planned on making some sort of lamb chop something'er other but then I stumbled upon Martha's quick lamb recipes after a Google search and this one stood out to me. It sort of feels like I cheated using ground lamb, however, I'm really glad I discovered this dish. It's basically a marriage of two awesomes: the meat mixture is sooo good after all the spices have been added and it simmers together. I could eat it out of the pan. Then you add the ricotta/feta cheese mixture and suddenly there's an event happening in your mouth!

I've posted Martha's original recipe but as for my modifications: I ended up using more feta, almost double. And I used a half less onion. And since I love to just grab and throw minced garlic out of a jar; pretty sure I used double or triple the original amount. Other than that, I stuck to this recipe and it was almost perfect.

Next time I will cut up the eggplant chunks even smaller. I love eggplant which was a big reason why I chose this recipe but when the chunks are too big, they overpower each bite. They become like the other woman in this marriage of two awesomes, dividing the flavor instead of allowing them to work in harmony.

Okay, before this gets any weirder, here she is: 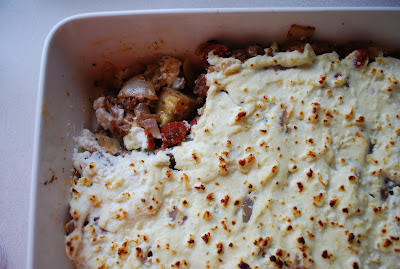 Preheat oven to 450 degrees. Butter a 4-quart ovenproof dish. On a baking sheet, toss eggplant with 6 tablespoons oil and 1/2 teaspoon each salt and pepper. Spread in a single layer, and roast in the oven until soft and golden, 20 to 30 minutes. Transfer eggplant to prepared dish, spreading in an even layer.

In a large saucepan, warm remaining tablespoon oil over medium heat. Add onions, garlic, and ground meat; cook, stirring to prevent sticking, until meat is browned, 5 to 7 minutes. Stir in drained tomatoes, tomato paste, parsley, oregano, cinnamon, and 1/4 teaspoon each salt and pepper. Simmer, crushing tomatoes with the edge of a spoon, 15 minutes. Spread the mixture evenly over the eggplant.

Heat broiler. In a small bowl, mix ricotta, feta, egg, 1/8 teaspoon pepper, and a pinch of salt. Pour mixture over the casserole, and spread evenly to the edges. Broil until topping is browned in spots, 5 to 10 minutes. Serve hot.