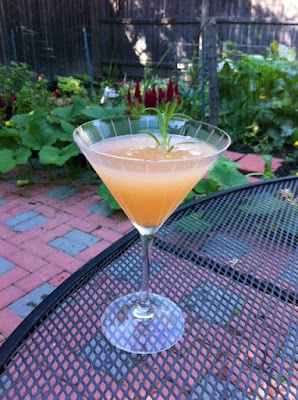 Our good friend Jenny writes a garden blog called Girl Has Thyme so I requested she come up with a garden-inspired cocktail and write a guest 'Thirsty Thursday' post for us. She came through and I'm so excited to try this! And if you like playing in the dirt, make sure to follow Jen here!

Emily has asked me to write a guest post on a garden-inspired cocktail. When she asked, I immediately knew what I wanted to create.

A few years ago, my mom and I had dinner at Ray’s Boathouse in Seattle, where we were served a rosemary grapefruit martini that was absolutely fantastic. I checked out their menu description online and it calls for grapefruit vodka with rosemary and lemon sour. I thought about this over the weekend and decided I wanted a martini that more closely resembled a greyhound. I don’t know of a drink that tastes more summery than freshly squeezed grapefruit juice and vodka. I just had to figure out how to incorporate the rosemary, which works so nicely with citrus.

I turned to the best cookbook I know for incorporating herbs into your recipes, “The Herbfarm Cookbook” by Jerry Traunfeld. In full disclosure, I’m a bit of a cookbook pusher. But, I insist that this book is a tremendous help in understanding how to use all the lovely things you have growing in your herb garden. Jerry Traunfeld is the executive chef at Woodinville’s famed Herbfarm Restaurant. The cookbook has a section about making herb-infused simple syrups to be used for sorbets and other desserts. I have been reading about herb-infused syrups a lot this summer and knew this was my opportunity to give it a shot.

I decided to make a rosemary-infused simple syrup, the secret weapon in my Rosemary Greyhound Martini. Rather than using Traunfeld’s master recipe for simple syrup, and being an experimenter in the kitchen, I chose to work off his recipe for Rosemary Lemonade. While I think his master recipe would be excellent in a sorbet, I wanted something less sweet in my cocktail. In his lemonade recipe, Traunfeld starts by making a syrup with ½ cup sugar and 2 cups of water, which makes for a subtler sweetness and allows the rosemary to be the star of the show. The result is a lightly sweetened syrup which pairs wonderfully with the grapefruit juice and vodka.

The martini is not too sweet, nor too tart… just right. The rosemary flavor is definitely there, yet more refined than if it were muddled. And this cocktail knows it’s more refined, it’s simply beautiful! I am now completely obsessed with creating herb-infused syrup and plan on making a few more to have on hand. It would be an easy way to turn sparkling water, or even a club soda, into something really special. Enjoy! Cheers! 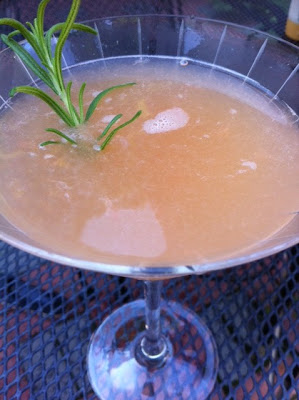 Rosemary Greyhound Martini, inspired by Jerry Traunfeld of The Herbfarm

2 parts freshly squeezed grapefruit juice (freshly squeezed is key here)
2 parts Vodka (I prefer Kettle One, but use whatever you like)
1 part Rosemary Infused Simple Syrup (recipe to follow)

Combine in a cocktail shaker filled half-way with ice, shake well, and strain into glass. Garnish with fresh rosemary sprig.

Bring the sugar & water to a boil. Remove from heat. Add the rosemary , cover and let steep for at least 30 minutes. (I allowed mine to steep for an hour) After steeping, strain the syrup into a jar or pitcher for later use. Posted by Emily Adamson at 7:03 AM