I was hesitant to make June's recipe yet strangely enough I had ALL of the ingredients for the cookies, minus the flour, already in my cupboard.

First off, I have to give a shout out to Jolie for picking a recipe with applesauce in it because it's a staple in our home these days. My son thinks it's like the nectar of the gods or something; he loves it that much. So we always have applesauce. The other ingredients...don't really know how long they've been in my cupboard but I found them and used them. Oh well.

So I made the cookies and switched up a few ingredients along the way: Instead of veg oil, I used extra virgin coconut oil (almost the full amount) and left a little space to add some flaxseed oil too (about 1/4 c). I used oat flakes instead of bran since that's what I had in my cupboard. I used finely chopped walnuts. And I used Amaranth flour which is gluten free. I also decided these cookies needed some spice. How about some cinammon with that applesauce? I added a couple heaping dashes of pumpkin pie spice and a couple dashes of cinammon too. I don't bake; why not?

Well, then I realized the requirement to get my husband to try these would be something much sweeter added in the mix, so I found butterscotch chips and chocolate chips in the cupboard (don't ask how old) that went in half the batch.

I was nervous. You know how you taste the batter and just know it's going to be amazing? Not so much my reaction this time. It was okay but not great. I wanted Betty Crocker and I was getting more hippy, Mother-Earthy.

The end result: Yummier-than-expected hippy Mother-Earthy! Something happened in the baking process and these little cookies turned out pretty good. I could really taste the spices, which I think were an important add. And for my husband's version, the spice with the butterscotch was awesome. I can't believe I'm going to type this; I would leave out the chocolate next time.

I'm happy with the outcome. And I'm happy to know I have a crap load of stuff for baking in my cupboards after all this time. Go figure... 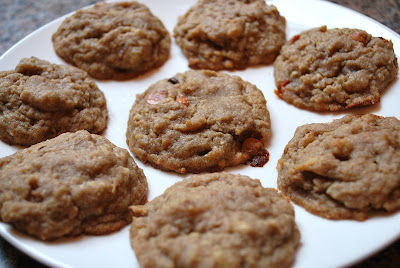