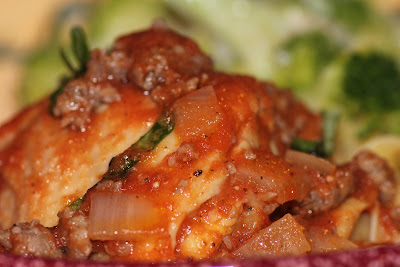 I skipped the bacon. I tried ordering just 4 slices of bacon from my grocery store’s deli and I wasn’t paying attention and was handed four slices of Canadian bacon. NOT THE SAME THING! So before my three hours of high slow cooking was up, I just cooked some ground sausage and stirred it in to the sauce (so much for this being a healthy recipe…).

I also skipped the pre-cooking steps (that drives me crazy with slow cooker recipes). Instead, I blended ½ onion, garlic, spices, wine and tomatoes and poured the raw mixture over the chicken in the crock pot. I diced the remaining onion and threw it in on top of the chicken and sauce.

And since there are just two of us, I used six (vs. 10) chicken thighs which was plenty for Night 1 and 2, plus provided lots of leftovers!

I topped it with basil instead of parsley.

I served the chicken over egg noodles with broccoli with creamy Parmesan sauce on the side. Overall this was good, but kind of boring. Not bad, but not superb either. Hmmm, maybe it would have been better if I had followed the directions! 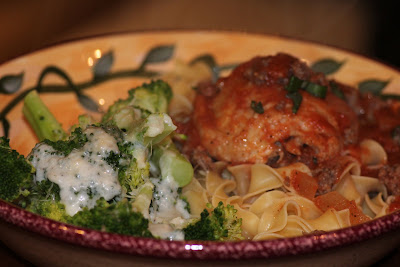 I put on gloves and shredded the chicken before I put away the leftovers so I’d be ready to go for night 2. 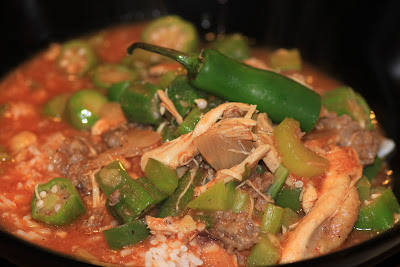 This was awesome! I came home late from work and only had to spend about 10 minutes making a great dinner.

I had intended to cook regular brown rice (because I didn’t have instant) but got home too late, so I just made Thai rice to serve the gumbo over. I also added celery and a Serrano chili and served red pepper flakes on the side. Next time I’d use a red bell pepper (vs. green) for more color. We washed the gumbo down with cold beer!

My overall thoughts is that this is a pretty sweet recipe. I love the concept of getting two completely different dinners out of one recipe!

I can't wait to hear how this turns out for everyone else!
Posted by Emily Adamson at 4:43 PM