Wine and Tomato Braised Chicken - The gift that keeps on giving 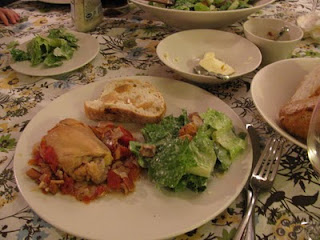 So, the real beauty of being such a total slacker (actually, correct that, such an over-achiever that I work full time, have two kids in diapers and also have decided to do this blog) --of being such a total OVER-ACHIEVER is that by the time I got around to finding the time to pull off this recipe, mostly everyone had already tried it. And critiqued it. Which meant that I had the luxury of reading all the critiques and that I could be the one to nearly perfect it! Which is what I did, really. If I'm being honest.
Here's something crazy, though. What I realized is that nearly no one actually followed the recipe. And I noticed a lot of comments about night one being a little bland. So I thought I would accept the challenge in its entirety and follow the recipe from beginning to end. No additions or subtractions.
This sounds like an easy task. But as I stood in the meat isle at Freddie's (I would be lying if I didn't say that I stood there for so long I had to send my husband on to shop without me because I felt too under pressure with him watching me contemplate whether or not I REALLY wanted to buy the thighs. With BONE. And SKIN! And I that that would mean I'd have to PEEL the skin) I started to second guess myself.
I held strong. I ended up buying the thighs. with bone. And skin. And I peeled the skin. And I trimmed the sides. And I did the pre-cooking before crock pot-ing (which, frankly, seems like a crime against my crock pot) But it turned out to be worth it. And I only did one thing differently but it doesn't count because I bought fresh Thyme instead of dried. And I think that made it tastier, probably.
Anyway, after I made it, the chicken was basically floating in a bath of super yummy broth (which had my husband at 'bacon' and me at 'wine') so I decided to use a slotted spoon to get the yummy morsels (bacon, tomato, garlic, etc.) and put them on the plate as a bed for the piece of chicken. As a side dish I made caesar salad with homemade croutons and roasted garlic. Then I served some french bread (thanks Kami!) with butter and the leftover roasted garlic (wrap an entire bulb of garlic in tinfoil and bake at 375 for 45 minutes) to spread on the top. Yum.
So, overall it was a success. It was pretty tasty. Not super easy but a good project for a Saturday and a great meal to serve to friends. In the end, though, my husband's critique was the best: "It seemed like a lot of work for some chicken pieces." You can see he's really getting into my blogging. 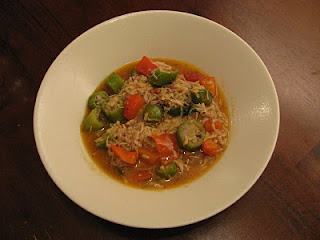 Chicken Gumbo was definitely the winner of the two recipes. I also followed this one exactly, too...except I made it spicier. I added extra Cayenne and lots of red pepper flakes. It was super spicy and delicious. I served it with a Gin and Tonic (which always makes me think of summer) because I thought it would be a refreshing compliment to the spiciness of the gumbo. It was a great choice even thought it made me feel a little trashy...
But now to the gift that keeps on giving part. We got two meals out of one (and a half) recipe(s) and I still have gumbo leftovers for work tomorrow. Lucky me. It's going to be one of those days where I want to eat my lunch by 10:00. And we were also inspired by how tender the chicken was in the crock pot...how it just fell off the bone. So now my husband wants to figure out how to make crock pot chicken wings for the Superbowl. And since he hasn't been in the kitchen since the last time he made chili dogs, I'm pretty excited. Then, tonight while we were eating the gumbo and having a philosophical conversation about okra and whether or not it was a pepper, a vegetable, or a "stick" we realized we really liked it! And then I remembered that one of my dad's favorite meals from his childhood in rural Texas was Fried Okra! So we're going to try that next.
So, thank you, Wine and Tomato Braised Chicken! You have fed and inspired us.
-The A team
Posted by Amber A at 8:21 PM